A frequently asked question on the various #ubuntu-* channels I lurk around on FreeNode is that of getting Ubuntu Focal (20.04) booting from USB on a Pi. The major issue here is that Focal still uses U-Boot and that doesn’t work with USB boot on the Pi (our U-Boot build does now support both the USB2 and USB3 ports on the Pi 4, but the MSD support doesn’t work for some reason).

However, U-Boot isn’t critical to booting Ubuntu. In fact, on the armhf images it’s basically redundant. On the arm64 images though it does have one very important job: decompressing the gzip’d kernel.

How come the kernel doesn’t decompress itself? Because arm64 kernels can’t. For whatever reason, the Linux kernel includes self-extraction code for x86 and armhf … but not arm64 where “that’s the bootloader’s job”. Around the time of Focal’s release, the Pi’s native bootloader didn’t support any kind of extraction, so we shipped a U-Boot script to handle decompressing the gzip’d kernel.

Later on in 2020, the Pi’s bootloader got an upgrade to support decompressing gzip’d kernels but Focal’s boot sequence still uses U-Boot because forcing a boot sequence change on existing installations is not something I’m keen to do unless absolutely necessary (that said, it’s something that’ll need tackling for the upgrade to the next LTS).

On a Fresh Install

First let’s tackle installing a completely new Focal image on a USB SSD and adapting it so it’ll boot from USB. Bear in mind your Pi 4 will already need to be configured to boot from USB so do that first if you haven’t already (this is one-time setup though so if you can already boot your Pi 4 from USB, you’re all set).

Flash the Focal arm64 image (which must be point release 2 or later) straight to your SSD drive. The easiest way to do this is with the Raspberry Pi imaging utility:

Now, jump to the “Boot Surgery” section below!

From an Existing Install

Converting an existing SD card installation is a very similar procedure. First we’ll deal with transferring the content of the SD card to the SSD. I’m assuming here that your SSD is at least as large as your SD card. If that isn’t the case you’ll need to go and read about shrinking partitions and such-like but it sounds rather unlikely so I’m going to skip all that here.

The first step is simply to make sure that your installation is up to date. You must have an updated bootloader for this to work, so boot your SD card and run a typical sudo apt update, sudo apt upgrade cycle. Then shut the Pi down, and get a machine running Linux other than your Pi with an SD card reader and a USB port.

It is possible to do this on a Pi, especially one that’s already USB booted where you can use the internal SD reader as a source, and a spare USB port as a target, but that’s rather circular so for the purposes of this article let’s assume you’ve got an Ubuntu PC lying around!

On your PC, insert your SD card and your SSD in some appropriate USB enclosure. I’m going to assume your SD card appears as /dev/mmcblk0 and your USB enclosed SSD as /dev/sdf below. If you want to be certain, before inserting the devices run sudo dmesg -w and watch the output as you insert them. The device names should be apparent from the output.

Now for some surgery on the boot configuration. Unplug the SSD’s enclosure from your PC and then plug it back in so that the freshly written boot partition (labelled system-boot) auto-mounts (if your PC is running Linux, the writable partition will likely auto-mount too, but system-boot should auto-mount on everything including Windows and Mac OS X).

On the system-boot partition that’s mounted, find the config.txt file and open it in a text editor (I think Notepad can handle UNIX line-endings these days; Windows users please let me know if this isn’t the case!). It should look like this:

First off, ignore that warning at the top (I wrote it, so take it from me that you can ignore it!). I’ve covered why it’s there and why it was wrong before, so go read that if you’re interested, but for now all that’s important is that you can happily modify this file without breaking stuff (if you’re reasonably careful). In fact, feel free to delete that comment :-)

Now, comment out all the kernel= lines pointing to U-boot, and the device_tree_address= line. Then under the [all] section add kernel=vmlinuz, and initramfs initrd.img followkernel. Your file should wind up looking something like this:

Obviously if you want to undo the changes you can simply comment out the lines you’ve added and uncomment the ones you commented out (one of the joys of textual configuration being that leaving obsolete stuff commented out for reversion is trivial!).

Save your changes, and safely remove your USB enclosure however that’s done in your particular OS (don’t just unplug it, you need to make sure everything’s unmounted cleanly). 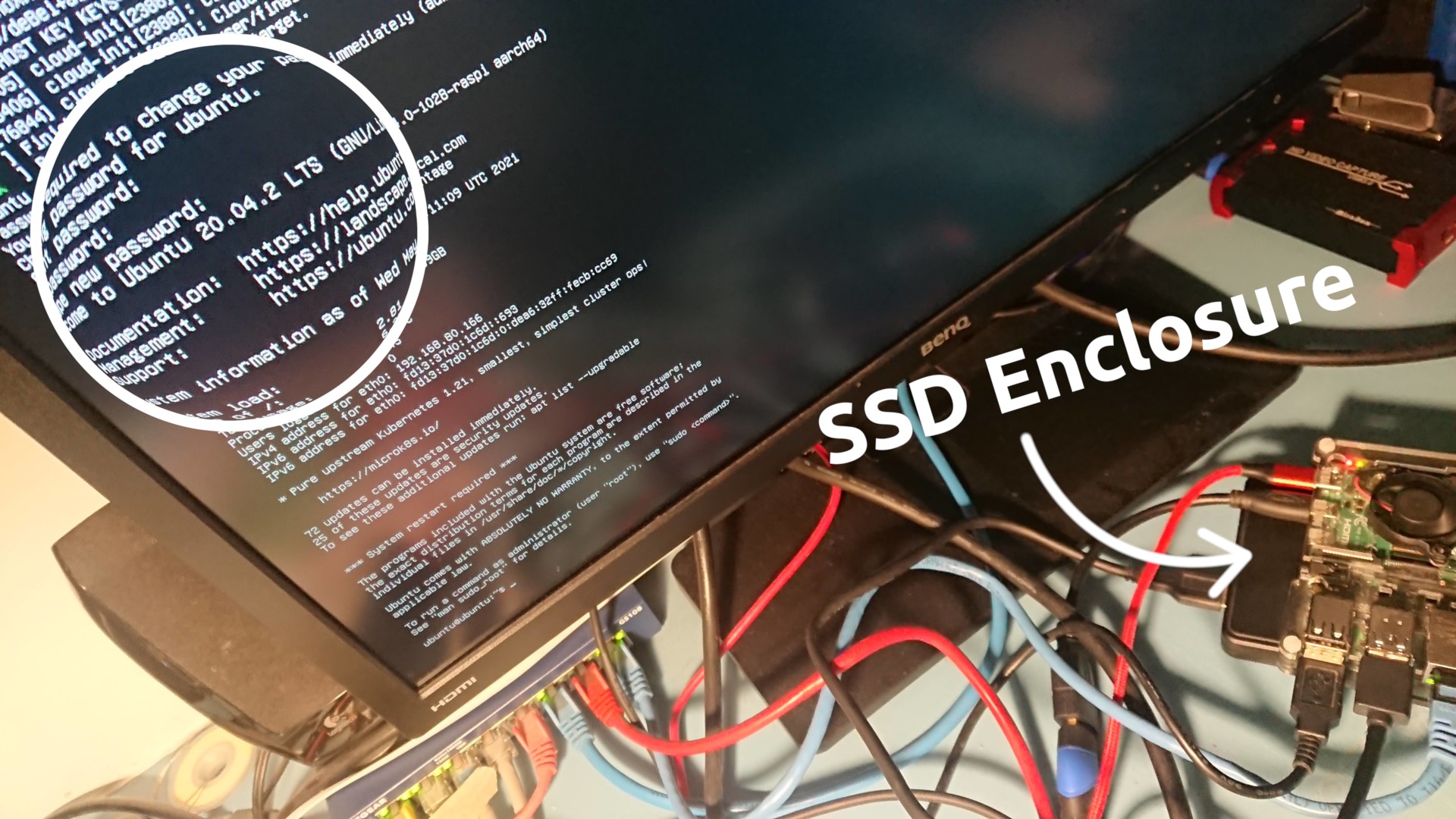 And you’re done! Connect the enclosure to a free USB3 port on your Pi 4 and you should be good to go.