Now that Martin’s given the game away on Twitter, it’s probably a good idea for me to post a quick guide on installing the new Ubuntu Desktop for the Pi on various media. So, here goes!

Now, continue with one of the sections below…

To install on an SD card is pretty much simplicity itself: 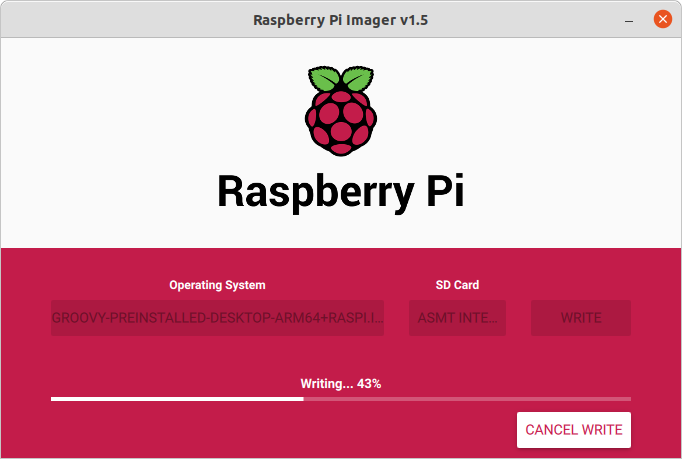 Then you can boot the card on your Pi 4.

In Groovy we’re (finally!) adding support for booting Ubuntu directly from a USB attached hard-drive or SSD with no SSD card involved. The first thing to ensure is that you’ve got an up to date EEPROM version on your Pi 4 (as USB booting was added after the Pi 4’s release). This is easy enough to accomplish under either Raspbian or Ubuntu:

Don’t worry about having to do this on every EEPROM upgrade because you don’t have to. Each EEPROM upgrade extracts the current EEPROM configuration and merges it with the updated EEPROM binary before flashing it.

Now that the EEPROM’s dealt with, how do we get the image onto a hard drive?

You should now be able to boot your flashed drive on your Pi 4 off your USB-attached hard-drive without any SD card inserted. Be aware that some drives have issues being used to boot the Pi. In particular:

There’s lots of good information on both the Pi forums and various GitHub issues for debugging boot issues; here’s a selection of links in a rough “look at this first” order:

What if you have a hard-drive larger than 2Tb (or SSD if you’re richer than Croesus) and want to actually use all that space? The default MBR partitioning on the image won’t be much use as it can’t address anything beyond 2Tb. Thankfully, the Pi’s bootloader now supports GPT partitioning too so this isn’t a big deal and just requires a minor tweak to the partition table.

The following instructions are Linux-specific. I’m sure it’s possible to do this on Windows and Mac OS too, but you’ll have to Google that if you need it. I would advise doing this with the drive attached to another machine (i.e. when you’re not booted from it). It might be possible to do this on a “live” system, but I haven’t tried that so YMMV!

Have you actually tested this?

For the last week I’ve been using the desktop image on and off on a Pi 4 with 4Gb of RAM (I’ve got an 8Gb model here, but obviously the point is to try and validate that 4Gb is “sufficient”), with my little laptop as a backup. However, this week I’m embarking on something a little more adventurous: using it full time as my only desktop (laptop strictly for emergency backup only, and no desktop either because … well, it sort of blew up).

The specific configuration I’m using is: booting off a small 120Gb SSD I had spare. Anyway, if I come up with any tweaks along the way I’ll post a write-up later this week. Wish me luck!